Aged Taiwan Bao Zhong, and How I was totally mesmerized by it (II) 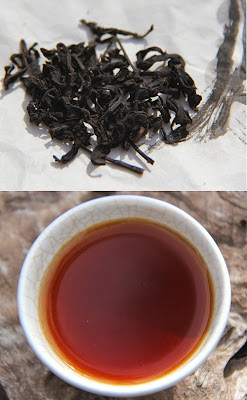 continue from Part I ...

So here it was. A very aged bao zhong, fooled me enough to make me think it is an aged pu-erh. But only half jar left on Mr. Lu's shelf.

To solve my misery, Lu gave me phone# of a friend of his. Whom I was told survived a bad oral cancer and surgery, and since then became an avid collector of aged oolongs and, occasionally, aged pu-erhs.

Couple days later, I met Mr. Chen in his house. Another candyland for tealovers! Small jars lined up on shelves, with bigger jars stood wherever they can find an empty space. Mr. Chen told a story about how he survived the cancer surgery/treatment nearly 10 years ago, and since then has searched high and low for aged teas. Why?

"Because all other teas, newer teas, are too harsh and astringent for me."

He started with collecting aged pu-erhs. With the price of pu-erhs went sky-rocketing in later years, he found a paradise in Taiwan's own aged oolongs. He found initially he could only stand aged oolongs older than 30 years old. With health gradually improved, he can now enjoy oolongs of 20 something.