Aged Taiwan Bao Zhong, and How I was totally mesmerized by it (I) 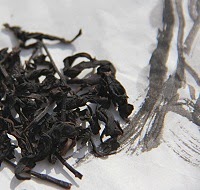 In October, I went back to Taiwan. To see my parent and friends, and also hunted for new tea or teaware treasures.

I visited the ceramic artist, Mr. Lu, who made those nice wood-fired Shino Glas teaware as we offered on Hou De. His workshop was like a candyhouse for tea lovers ... not only I got to see many of his artware and teaware, but also jar after jar of different teas! From aged pu-erhs to wuyi yen cha, you name it and he probably has one or a couple jars of it somewhere. And he used only spring water from Yang Ming Shan region.

Sometimes we chatted so loud, that I forgot to pay attention to what tea he was serving (we tried probably more than 10 different kinds of tea from his jars). Suddenly, I paused and sniffed, and sniffed and took a sip.

I have had lao Taiwan oolongs before. Even offered several lao oolongs on Hou De. But this one totally fooled and mesmerized me! I got to have it. But Lu only have a half jar. He introduced me to a friend of his who have been collecting lao Taiwan oolongs for years.

Later I learned why this lao bao zhong was different from what I have had before: it is old enough (70's stuff) to be so different. And the storage of it amplifies the difference. But how lao bao zhong would converge to the grand feeling of aged pu-erh is still surprising, if not puzzling.